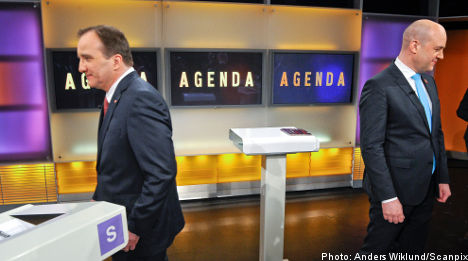 “Who do you believe is the most skilful at running a government? Is it Prime Minister Fredrik Reinfeldt or the Social Democrat leader Stefan Löfven?,” the pollsters asked.

63.4 percent of respondents of the survey answered in Reinfeldt’s favour, increasing the current prime minister’s lead with 3.7 percent since before the summer.

Among supporters of the opposition parties – the Social Democrat Party, the Left Party and the Green Party – 29 percent believe Reinfeldt is the most skilful leader.

Among supporters of the centre-right coalition government – the Moderate party, the Liberals (Folkpartiet) and the Centre Party – four percent believe that Löfven is the most skilful.

The prime minister’s support is the strongest among the self-employed and those employed in the private sector. He also has particularly strong support among voters in big city areas.

In the Stockholm region, 72 percent believe that Reinfeldt is the most adept at running a government.