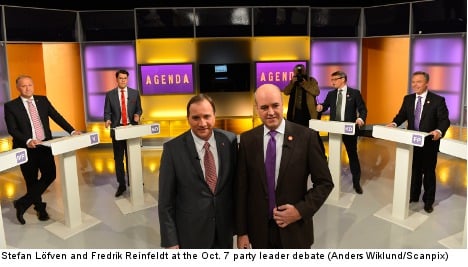 “You are good at fixing numbers,” said Löfven, addressing the prime minister.

“If we win the election we’ll reinstate a more humane social insurance programme,” said Jonas Sjöstedt, leader of the Left party, taking a swipe at changes to Sweden’s welfare system with which many opposition politicians disagree.

“It was interesting that Jonas Sjöstedt said something about what they want to do together. You’ll be opening the doors to early retirement,” Prime Minister Fredrik Reinfeldt responded, taking a jab at the opposition parties’ past problems at working together.

When discussing the current health insurance regulations, which Löfven called rigid and inhumane, the differences between the government and opposition were especially clear.

“It doesn’t help to call it a business plan when the plan is that the shops will go bankrupt,” said Liberal Party (Folkpartiet) leader Jan Björklund, adding that higher taxes give fewer jobs, especially to Sweden’s young people.

“I am proud that all parties in the government have been reflected in the budget,” said Reinfeldt, in response to Löfven calling the government irresponsible.

“To invest during the bad times is the right move.”

Annie Lööf of the Centre Party was not impressed with Löfven’s talks of the importance of businesses.

“You give millions to Swedish companies, but you take billions,” she said.

Christian Democrat head Göran Hägglund and Lööf criticized the Social Democrats and the Left Party for wanting to take away the right of the elderly to choose their own home care and retirement homes in the fight for welfare gains.

Löfven promised a decision on the topic in autumn, while Reinfeldt acknowledged the current problem.

“We’re not saying that everything is fine, but what worries me is that many businesses may be closed down if you win the election in 2014,” Reinfeldt said.

Both the Alliance and the opposition were also fighting the Sweden Democrats’ Jimmie Åkesson and his anti-immigration stance.

Björklund called the Sweden Democrats’ policies “inhuman” and based on “pure selfishness”.

Meanwhile, Löfven took aim at what he say as Åkesson’s divisive approach.

“We’re not going to have an ‘us and them’ in Sweden, we’re going to just have ‘us,” said Löfven.