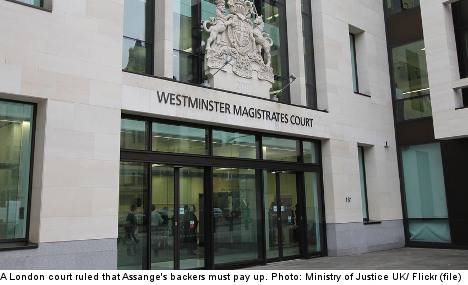 Chief Magistrate Howard Riddle at Westminster Magistrates Court in London said the nine had to pay the sum to the court by November 6th.

Assange has been in Ecuador’s embassy since June in a bid to avoid extradition to Sweden where prosecutors want to question him on sex assault allegations.

Britain has insisted it will arrest the 41-year-old Australian if he leaves the embassy premises.

Vaughan Smith, a documentary maker and businessman who let Assange stay on bail in his country mansion for more than a year, last week addressed the court on behalf of the nine sureties, arguing why they should not lose their money.

“We don’t see how justice is served by punishing us for having done our best to serve the public interest in this complex and challenging case,” he told the court.

“We submit that the sureties are wholly blameless, that we have worked assiduously to help Mr Assange to meet the requirements of the court.”

In his judgement, Riddle acknowledged the nine backers had acted in good faith but said they must have known the risks when they agreed to support Assange.

“However, they failed in their basic duty, to ensure his surrender. They must have understood the risk and the concerns of the courts.

“Both this court and the High Court assessed that there were substantial grounds to believe the defendant would abscond, and that the risk could only be met by stringent conditions including the sureties,” he said.

The nine have been told to pay between £3,500 and £15,000 each. They do not include Assange’s high-profile supporters such as socialite and campaigner Jemima Khan and film director Ken Loach.