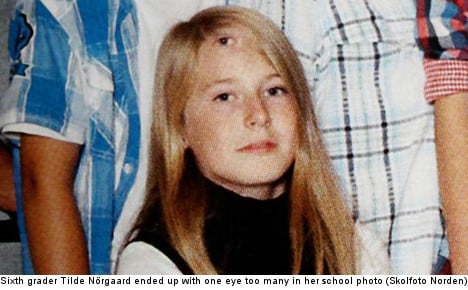 “First everyone was laughing, Tilde too, because we thought it was funny,” Tilde’s sister Anna told The Local.

“But then we noticed it made her sad and we realized it was actually quite bad that they never noticed the mistake.”

The photo-fixing foul-up was discovered following the distribution two weeks ago of the annual photo album for students at Månesköld school in Lidköping in central Sweden.

According to Tilde, there was nothing unusual at the actual picture-taking session, during which the photographer took several snaps of each class at the school.

But during the processing of the pics, something went wrong, resulting in a third eye placed in the middle of Tilde’s forehead.

Speaking with the local Nya Lidköpings-Tidningen (NLT), Tilde explained the obvious mix up left her “a little angry”.

The photography company responsible for the catalogue, Skolfoto Norden, had “no good explanation” for the apparent case of wayward digital manipulation took place.

“When we went back and looked at the original picture no one had their eyes closed. There wasn’t anything that might need correcting,” head of photography David Nabb told The Local.

He explained that when students in school pictures have their eyes closed, the company “in emergency situations” sometimes retouches the images by digitally cutting and pasting an eye from another student in the picture.

Despite being unable to explain how Tilde received a third eye in her school photo, the company nevertheless offered her 1,500 kronor ($225) in cash as compensation for the mistake.

“She will probably just go shopping with the money,” Tilde’s sister Anna speculated when asked what her sister might do with the money.

In addition, Skolfoto Norden plans to send out a corrected version of the catalogue in which hopefully all eyes, arms, and ears will be found in the right place.

“Things like this just can’t happen. But in this case it did. It’s really embarrassing for us. I’m just happy that Tilde seemed to have taken the whole thing well,” said Nabb.