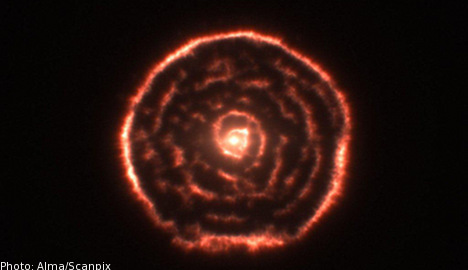 “First it gets rid of all the matter; death throes that go on for approximately one billion years. Then all that is left is the core of the star. That makes it a so called ‘white dwarf’,” said Hans Olofsson, head of the Onsala space observatory near Gothenburg, to news agency TT.

Olofsson is one of the scientists behind the study, which will be published in Nature, but the discovery was made by using the very powerful Alma telescope in Chile.

The dying giant is called R Sculptoris, and like other stars in the final phase of its life, it is hurling out large amounts of matter into space.

This matter becomes the raw material for future stars, and is what life on planet Earth initially formed form, according to scientists.

The spiral structure, thought to have been created by another star which circles E Sculptoris, can be found in the matter that the dying giant is hurling into space.

Scientists call this discovery remarkable as it is the first time that anyone have been able to see such a spiral three dimensionally.

The find also indicates what the process of our own sun’s demise will be like in six or seven billion years.