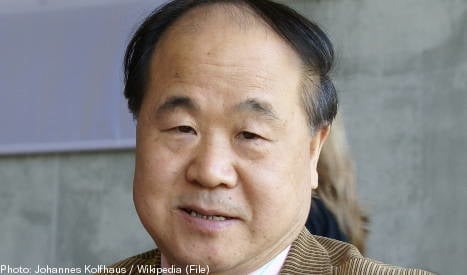 Yan is an author “who with hallucinatory realism merges folk tales, history and the contemporary”, the Academy’s Permanent Secretary Peter Englund said in a short announcement shortly after 1pm in Stockholm.

“Through a mixture of fantasy and reality, historical and social perspectives, Mo Yan has created a world reminiscent in its complexity of those in the writings of William Faulkner and Gabriel García Márquez,” the Swedish Academy said of Yan in its official biography.

Among Yan’s works are “Falling Rain on a Spring Night”, “Life and Death Are Wearing Me Out”, and “Red Sorghum”.

This is the first time a Chinese national and the second time a Chinese-born writer has won the prize, after Gao Xingian, who received French citizenship in 1997, was honoured in 2000.

Mo Yan, 57, is perhaps best-known abroad for his 1987 novella “Red Sorghum”, a tale of the brutal violence that plagued the eastern China countryside — where he grew up — during the 1920s and 30s.

The story was later made into an acclaimed film by leading Chinese director Zhang Yimou, and won the Golden Bear at the Berlin film festival in 1988.

Following the announcement, the Nobel Foundation said the Swedish Academy recommend Yan’s novel “The Garlic Ballads”, published in English in 1995.

Ahead of the announcement, Swedish betting company Unibet had Yan as one of the favourites to win the 2012 literature prize, with 6.5 to 1 odds.

Born in 1955 in the Shandong province in northeastern China, Yan’s given name was Guan Moye. His pen name, Mo Yan, means “don’t speak” in Chinese.

Yan has published novels, short stories and essays on various topics, and despite his social criticism is seen in his homeland as one of the foremost contemporary authors, the Nobel committee noted.

In his writing Mo Yan draws on his youthful experiences and on settings in the province of his birth.

Both Yan’s parents were farmers and he left school at the age of 12 during the Cultural Revolution to work in the fields and then at a factory.

In 1976 he joined the People’s Liberation Army and shortly thereafter started studying literature and writing.

His first short story was published in a literary journal in 1981, although his breakthrough came a few years later with the novella “Touming de hong luobo” (1986, published in French as “Le radis de cristal” in 1993).

Mo Yan has authored other acclaimed works including “Big Breasts and Wide Hips”, “Republic of Wine” and “Life and Death are Wearing Me Out”.

He has also written dozens of other novels, novellas, and short stories, generally eschewing contemporary issues and instead looking back at China’s tumultuous 20th century in tales often infused with politics and a dark, cynical sense of humour.

Last year, the literature prize went to Swedish poet Tomas Tranströmer in what is traditionally one of the most-watched announcements of the Nobel season, following the prizes for medicine, physics and chemistry earlier this week.

The Nobel Peace Prize will be announced on Friday, with the field of possible winners wide open, followed by the Economics Prize on Monday, wrapping up the Nobel season.

As tradition dictates, the laureates will receive their prizes at formal ceremonies in Stockholm and Oslo on December 10th, the anniversary of the death of prize creator Alfred Nobel in 1896.

Because of the economic crisis, the Nobel Foundation has slashed the prize sum to eight million Swedish kronor ($1.2 million) per award, down from the 10 million kronor awarded since 2001.