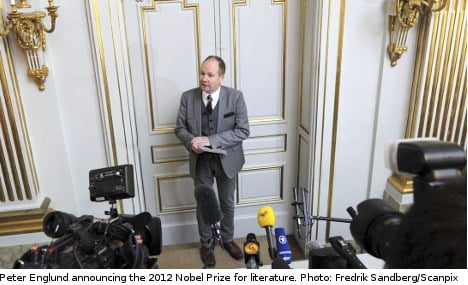 “One of the things that is special with this year’s winner is that he depicts – from within – a world that most of us don’t have access to. He is originally a peasant boy, born into a farming family and he worked in the fields until he was twelve years old,” Englund told The Local.

According to Englund there were no harsh deliberations when the committee took the decision, almost a week ago:

The work of 57-year-old Yan, who became the first Chinese national to ever win the prize, explores the brutality and darkness of 20th-century Chinese society with a cynical wit.

He is perhaps best-known abroad for his 1987 novella “Red Sorghum”, a tale of the brutal violence that plagued the eastern China countryside – where he grew up – during the 1920s and 30s.

The story was later made into an acclaimed film by leading Chinese director Zhang Yimou.

Meanwhile, Englund explained that the translations of Yan’s work into Swedish does his words justice.

“We are lucky to have a Chinese speaker on the panel and he has assured us that the translations are very good,” Englund said.

However, with the decision being reached a week ago – it hasn’t been easy to keep it a secret with the wild speculations and the betting that goes on online and in the media.

“It is something we need to think about and in later years we have had to become even stricter when it comes to secrecy,” Englund said.

To readers as of yet unfamiliar with Yan’s work, Englund recommends starting with “The Garlic Ballads”, first published in 1993:

“You should read Mo Yan when you are ready to face a whole new world, inhabited by new people and showing new ways of looking at the world,” Englund told The Local.

“But above all you should read him because he is a damned good author!”