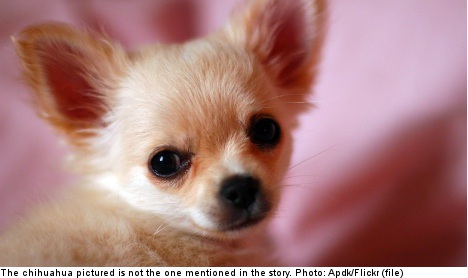 The dog was being taken for a walk by its owner who was horrified to witness the incident, which occurred in the southern Swedish town of Lund.

“I screamed at them and waved to them, but they say that they didn’t see me,” said the woman to the Sydsvenskan newspaper.

The Chihuahua was not on a leash at the time.

A motorist passing in the opposite direction who also witnessed the event turned around in an attempt to alert the police, but was unable to find them again.

When the woman reached the police by telephone soon after, the car in question returned to the scene, but the officers claimed that they had not even noticed what had happened.

The incident has now been reported to the police.

“This is being written up as a traffic accident that a dog has been run over. We’re not entirely certain of the circumstances surrounding it, but what we can state is that there is a traffic accident report that a police car, according to the information, has run over a dog,” explained Stephan Söderholm of the Lund police to the paper.

The incident is being investigated internally.