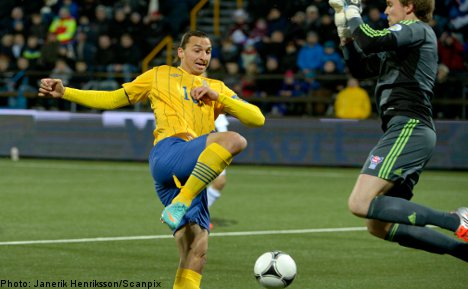 The Swedes had to dig deep to prevent a major upset in Torshavn against a team ranked a massive 131 rungs below them in FIFA’s world rankings.

Rogvi Baldvinsson, who had a fleeting two-week spell with Bristol Rovers this year, set Swedish nerves on edge with an opener for the home side in the 57th minute.

But despite making hard work of the north Atlantic islanders, Ibrahimovic expressed satisfaction after having secured the points.

“We won the match 2-1, it can’t get better than that, if you consider the result,” he told reporters.

Ibrahimovic called for improvements in Sweden’s upcoming game against Germany and cited the artificial surface at the Torshavn stadium as a reason for Sweden’s difficulties.

“Maybe the astro-turf caused us problems… But we shouldn’t blame that now, we are professionals, we are playing the Faroe Islands away – these matches aren’t easy any more.”

Germany’s crushing 6-1 win against Ireland in Dublin meanwhile kept them in command of Group C with a perfect nine points from three games.

Elsewhere in the group Austria and Kazakhstan battled out a 0-0 draw at the Astana Arena.

Sweden heads to Berlin on Tuesday in a match which may go a long way to deciding which country secures the automatic qualifying spot from the group.