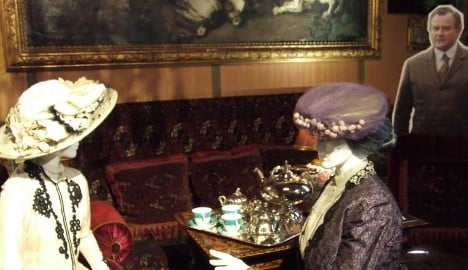 Standing side by side, the Downton costumes and clothes originally worn by the von Hallwyl family are delicately presented through the first floor of the museum.

“We were keen to weave the two narratives”, explained Annika Williams, the Museum’s curator, to The Local.

Related gallery: View some samples of the Downton exhibition here.

The von Hallwyls were part of a Swedish noble family who in 1893 commissioned a house in Stockholm where they would reside during winter months. The house, which was finished in 1898 costing the family 1.5 million kronor ($224,692), is now a museum.

Downton Abbey, which has been broadcast around the world and won numerous awards, is set during the early 1900s and portrays the lives of an upper class family and their servants against the backdrop of a country estate, Downton Abbey. It is all very old fashioned and very English.

The idea for the display came shortly after the production was broadcast in Sweden and visitors began to comment on the similarities between Hallwyl and Downton. Much like the show, Hallwyl prides itself on its unique and detailed display of both the ‘upstairs and downstairs’ way of life.

The exhibition features twenty costumes, mainly from the first series, which the museum hopes will seamlessly blend into the attractions of Stockholm.

To entice those wandering by and get everyone in the mood for all the impending nostalgia, old episodes play on a thoroughly modern plasma screen in the entrance.

From the flowing summer dresses in the rococo boudoir to the practical maid’s outfits hidden away in a side room it’s hard to tell, without looking at the guide, the television creations from the real dresses.

Originally the museum had wanted more servant outfits but due to filming they are still in use.

Williams also tried to secure clothes worn by one of the main characters Lord Grantham, played by Hugh Bonneville, but was unsuccessful. However, Grantham does make an improvised life-sized cardboard appearance.

Praising the show Williams attributes its success to a good script, great characters and an eye for the small things:

“It’s so well produced, the costumes are very well sewn and designed, and they are so attentive to the detail.”

“You get the feeling that you are being transported into that time,” added Williams.

Only a third of the costumes used in Downton are crafted especially for the characters with the rest coming from storage. One of the dresses on loan first made its screen debut in the 2004 film Finding Neverland.

And visitors who know their 20th century French fashion designers are in for a treat. Two dresses in the same room were inspired by the great Paul Poiret, one from the lead costume designer, Susannah Buxton, and the other from the Hallwyl collection.

The museum has clearly enjoyed using the show as a creative source for its own displays.

Subtle details that discreetly nod to the show lay waiting in every room for the eager Downton junkie to pore over, from the French sheet music resting on the piano to a 1912 newspaper headline declaring great tragedy.

One just needs good eyes, or have the curator standing nearby pointing them out and explaining their relevance.

“There are some Downton Abbey nerds working here. I can reveal that,” added Williams.

The lady of the house; Wilhelmina von Hallwyl, always intended for the townhouse to be a museum and had the foresight to preserve every possession.

As a result, the museum has around 50,000 items in its collection, including Lady von Hallwyl’s plaster cast, which she acquired after a motor vehicle accident.

The exhibition will run until January 6th 2013 and admission is 70 kronor.