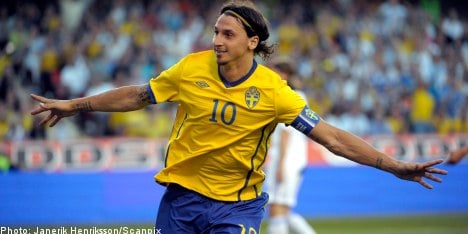 Sweden had to come from behind to beat minnows Faroe Islands 2-1 on Friday after Paris St. Germain striker Ibrahimovic popped up with the late winner.

The Sweden captain hit a 75th-minute strike against the fired-up Faroes who had stunned their guests by taking a shock lead on 57 minutes before Alexander Kacaniklic equalized on 63 minutes.

Sweden picked up their second win and are second in Group C with six points with Germany top with three wins from three games.

“If we maintain this presence, this level of organization in defence and comfort in our passing game, we will have a good chance (against Sweden),” said Germany coach Joachim Loew, adding that the key to Germany’s plans to pick up a fourth straight qualifier win is to stop the towering Ibrahimovic.

“He’s a dangerous player, who can decide games on his own,” said the 52-year-old Loew.

“(Germany goalkeeper) Manuel Neuer didn’t have much to do against Ireland, but that is not the yardstick for us and we expect it to be very different.

“Sweden are more dangerous in attack than Ireland, their offensive game is heavily focused on Ibrahimovic.

“He may be totally unpredictable, but he has individual class and can often find solutions to very difficult situations.

“He is a key player, but the Swedes also work very well as a team and it is always hard to score against them.

“It will be important that we disturb Ibrahimovic early when receiving a pass and don’t give him much space.”

Having missed Friday’s Germany’s 6-1 drubbing of Ireland in Dublin through suspension, Germany captain Philipp Lahm returns to the side at right-back and he will be marking Ibrahimovic in what will be one of his side’s most taxing assignments of the qualification process.

“All that counts now is Sweden, and we are very focused,” said the Bayern Munich full-back.

“We are facing a dangerous team, perhaps the strongest opponent in the group, and we want to bring in the next three points.”

“That was once again the football we know from Germany,” said Dortmund’s Reus following the Ireland win.

“Ibrahimovic is an absolute world-class player, but we will play on Tuesday with our heads held high.”