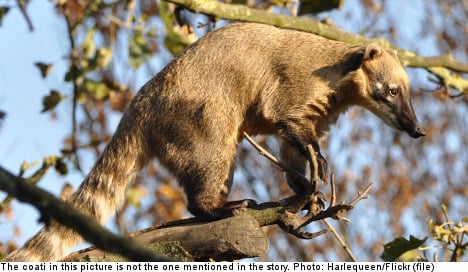 Caroline Ryding, a zookeeper from Norrköping, left her job at the Öland Animal Park (Ölands Djur och Nöjespark) last year after being exposed to what she described as constant mistreatment of the animals.

“A goat and a coati were beaten to death with a baseball bat. They had no room for them and couldn’t afford a vet. The owners told us not to say anything because what they did was illegal,” she told The Local.

The coati, also known as a Brazilian aardvark, was killed by another member of staff on the orders of the owners, according to Ryding.

“What they did was terrible, and they have got to shoulder the responsibility for it,” she told The Local.

However, Hans Uhrus, spokesperson at the animal park, explained that the zookeepers do indeed look after their stock.

“At the park, we always take good care of our animals,” he told The Local.

Ryding, however, told The Local that other animals were not properly fed over the weekends, were given the wrong food and often no water.

“I also heard that they let a lion cub starve to death, but I cannot confirm this,” she said.

Previous employees have also told national broadcaster Sveriges Radio (SR) how an ape died after a miscarriage, because the staff waited too long before calling for a vet.

“I left the job because I couldn’t work there anymore. I hope the situation improves there, I want them to take care of the animals,” Ryding said.

Meanwhile, park spokesman Uhrus said that the zoo is regularly checked by both vets and the County Administration Board (Länsstyrelsen).

“The county administration in Kalmar carries out regular controls of our operation through inspections, in accordance with the animal protection laws among other things. They have no complaints against the park,” he said.

This claim was backed up by park vet Karl Johan Nordfelt:

“As the park’s veterinary surgeon I visit the park at least once a week to see the animals and how they are kept. The animals’ well-being is checked everyday by the staff on site and I control how they are kept during my regular visits,” he said in a statement.

“I have nothing to criticize in the handling of the animals in the park.”

The animal park, on the Baltic island of Öland off the east coast of Sweden, boasts 100 different species of animals.