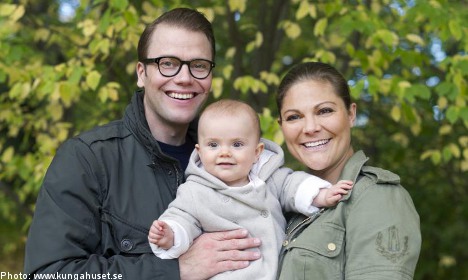 The pictures were taken in the gardens of the Haga palace in Stockholm, home of the Crown Princess couple, and include images of the young Princess romping among the autumn leaves, together with her parents Victoria and Daniel.

Click here for the new pictures of Princess Estelle

“In one of the Royal Palaces beautiful halls, we follow the ceremonies of Princess Estelle’s birth and christening. We also go behind the scenes with a unique film about the Royal Court’s preparations before the christening,” the Royal Court wrote in a statement on their official site.

The display will also include objects with a relevance to past royal christenings and to the Princess’s own baptism, including her baptism dress and various gifts the family received.

The Princess, formally known as Princess Estelle Silvia Ewa Mary Bernadotte, Duchess of Östergötland, was christened on May 22nd this year.

The display will be running from October 19th to March 3rd next year, every day except Monday, from midday to 4pm.

Tickets to the exhibit cost 150 kronor ($22.60) a piece and includes entry to other parts of the Royal Palace.