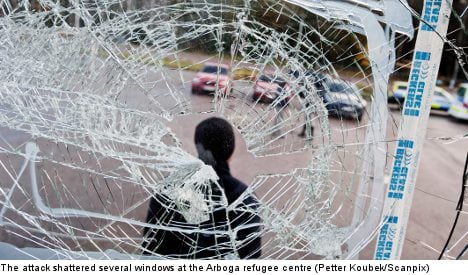 “All three are previously known to the police,” said Johanna von Wowern of the Västmanland County to news agency TT.

One person was reportedly injured in the attack, according to a journalist who was on the scene from the local Bärgslagsbladet Arboga Tidning newspaper; however this information is yet to be confirmed by police.

According to local news website magazin24, witnesses saw the three men drinking alcohol, throwing bottles at the centre and even assaulting people inside.

Local police officers were at the centre for two hours following the incident, which occurred around 12.30pm on Tuesday.

“We have received information that some people have left the scene and that there was a lot of broken glass after an incident in the area. We are searching for them with dogs,” said Åsa Hedin of the local police to the paper shortly after the incident.

“We’re in the process of investigating what has happened, in detail. I don’t know at this point if someone has been injured,” she said.

The police subsequently arrested three suspects, aged 31, 28 and 27. Officers are as of yet unaware of any motive for the attack.

This is not the first time a refugee centre in the area has been targeted. In January this year, large parts of the Migration Board’s housing facility in Arboga were damaged in a fire. At the time, 66 people were evacuated and three brought to hospital after breathing in smoke.

Officers investigating the incident could not find any natural causes for the fire and didn’t rule out that it could be arson.