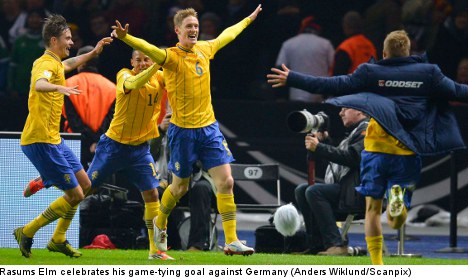 Midfielder Rasmus Elm wrote himself into Swedish football folklore with the dramatic right-footed equaliser as Sweden came back from 4-0 down with an hour gone to claim a point at Berlin’s Olympic Stadium.

Joachim Loew’s Germany had been cruising thanks to two early goals from Miroslav Klose before Arsenal’s Per Mertesacker, then Real Madrid’s Mesut Özil gave the hosts a comfortable lead.

But Erik Hamren’s side roared back as Sweden captain Zlatan Ibrahimovic headed home before Celtic’s Mikael Lustig, then Galatasary’s Johan Elmander rattled the hosts and then Elm produced the shock equaliser.

“It was still a strange feeling in the dressing room, it’s not every day on the international stage that you come back for a 4-4 draw having been 4-0 down,” said Hamren.

“To come to Germany and get a point against one of the best teams in the world is incredible.

“It is something historical, I am very proud of my team and the way they reacted.”

Germany remain top of Group C on ten points with Sweden second in the table on seven, but with a game in hand.

“To sum things up, the first 60 minutes were brilliant from us, the last 30 were incredibly weak,” said Loew.

“Honestly, shortly after the game I can find no explanation as to how we let a 4-0 lead slip out of our hands.

“It’s deathly quiet in the changing room: players are laid out on the benches and are totally speechless.

“Had we won the game, we would have been in control of the group, now things are wide open.”

It was Klose’s 66th goal on his 126th appearance having been honoured before kick-off with a fair play award for honesty having had a goal he scored for Lazio last month in the Italian league cancelled after admitting he touched the ball.

It was one-way traffic from the hosts as Reus again provided the final scoring pass from the same position when he combined with Thomas Mueller to put Klose in the perfect position to double his tally on 15 minutes.

Having also scored in the 6-1 victory over Ireland last Friday, Klose has now scored three times in two games to leave him with 67 international goals just one short of Gerd Mueller’s record for Germany of 68 set in the 1970s.

Sweden had barely launched an attack and Ibrahimovic hardly had a look in as the visitors were allowed only the rare forage into Germany’s half.

The third goal came from an unlikely source as Mertesacker scored only his second on his 84th apperance as he fired home from close range after Mueller headed across goal on 39 minutes.

It finished 3-0 at the break, but the fourth came soon after as Mueller again supplied the cross and with the Germans lining up to score, Özil, who celebrated his 24th birthday on Monday, fired home on 55 minutes.

Ibrahimovic showed his class when he turned his first clear chance into a goal after slipping his marker Holger Badstuber to power home Kim Källström’s header on 62 minutes to give the Swedes a lifeline.

With the bit between their teeth, belief flowed through the Swedes who doubled their tally two minutes later as Källström again provided the pass for Lustig to hit their second on 64 minutes with Badstuber again at fault.

Sweden were right back in the game and the German defence suddenly found themselves working overtime to keep their opponents at bay.

The third Swedish goal came on 76 minutes when Elmander fired through Badstuber’s legs to leave Loew fuming on the sidelines before Elm’s late equalizer.