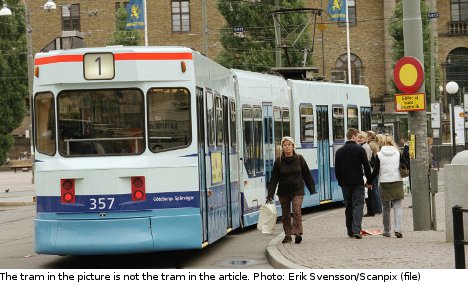 “We have tried with a dialogue but it hasn’t worked, which is why we resort to these kinds of measures,” said Anders Westgerd, spokesperson for the group to local paper Göteborgs-Posten (GP).

The protesters targeted a Gothenburg tram, as getting around on these is especially difficult in a wheelchair, according to the spokespeople for the group.

At 1pm, seven protesters in wheelchairs got on a tram at a stop on central Gothenburg square Järntorget. The tram driver was advised by control not to drive on, as there are only two spots reserved for wheelchairs on each tram.

The protesters said that the tram operator has had 33 years to deal with the problem but has failed to make it possible for disabled passengers to be able to take the tram as easily as regular passengers.

Police arrived on the scene some 15 minutes later and tried to convince the disabled protesters to leave the tram willingly.

However, the protesters would not leave and by 1.30pm the officers on the scene reluctantly decided to try to have them removed.

According to GP, they seemed confused as to how to go about it and it wasn’t until some twenty minutes later that the officer in charge approached the protesters and gave them five minutes to leave the tram or risk a prison sentence of up to 6 months.

Five minutes later, as they still hadn’t left the occupied tram, the officer extended their grace period by another two minutes, saying that they would be carried out should they fail to comply.

A few minutes later, five of the protesters wheeled their chairs off the tram, making it possible for it to leave the stop.

The other passengers had by then left the occupied tram in search of alternative transport and the traffic had been re-routed.

The protesters told the gathered press that they will not be happy until their demands are met by the transport operator:

“We demand that all the old trams are taken out of service and that Västtrafik buys new trams adapted for wheelchairs so that disabled people can travel freely by public transport just like all other citizens,” said Westgerd to GP.