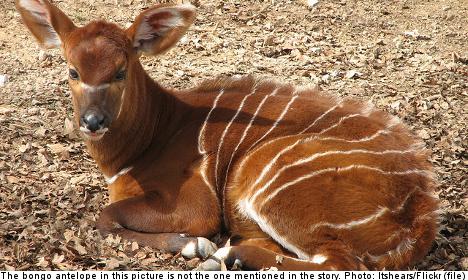 The Parken Zoo in Eskilstuna, eastern Sweden, will feature on the TV4 documentary series Kalla Fakta (The Cold Facts) on Wednesday night.

On the show is revealed how several animals, some of which were endangered species, had been killed by staff members of the zoo in what appears to have been a move to make more room for new animals.

One older female puma and her two ten-year-old young were killed in September to make way for new jaguars, according to the investigative journalism programme.

On the show, zoo head Helena Olsson explains that the pumas were put down as they were too old, according to the TT news agency.

A number of bongo antelopes were also killed off, although Olsson told the programme that they had been moved to another zoo.

The zoo’s CEO, Torbjörn Bergvall, said that the young pumas had actually died of illness and only one of the bongo antelopes was moved to another park.

However, the zoo had answered fans on their official Facebook page in summer that the pumas had been moved to another zoo and that the bongo antelopes were moved to zoos with better resources.

“That wasn’t correct, we were unclear there,” Bergvall told TT.

The zoo also released a statement on their Facebook page in reaction to a preview of the programme that aired on Tuesday.

“The Kalla Fakta report is made up of information from previous employees who don’t share our view on the importance of zoos to protect endangered species,” the zoo wrote.

“It’s also made up of an unfortunate interview with false information from our zoo head, Helena Olsson. We welcome investigation of our business, and we will address the content of the stated programme here after the broadcast on Wednesday.”

The programme premieres on Wednesday at 9.30pm on TV4.

The news follows Tuesday’s revelations about a different zoo in eastern Sweden which reportedly beat animals to death.