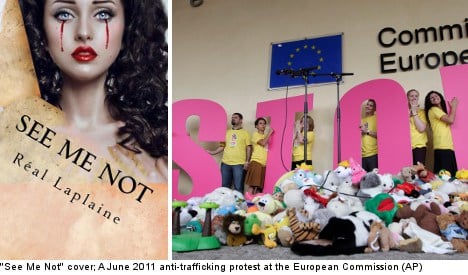 When Canadian author Réal Laplaine saw photos of a six-year-old girl in Calcutta taking care of her one-year-old brother, he was shocked.

The result was a novel, “See Me Not”, which tells the fictional story of a 12-year-old girl sold into sexual slavery at the age of eight. An American student’s chance meeting with the girl prompts him to try to save her.

Having recently moved to Gothenburg, western Sweden, Laplaine was put in touch with a Swedish pressure group, Real Stars, which uses art to help raise awareness about sex trafficking.

According to the group, “Fair Sex” is defined as “sex on equal terms and with mutual respect in all situations”. The group adds: “sex trafficking is the opposite of fair sex.”

“One of the reasons I hooked up with Real Stars is because of their work within the EU,” the author tells The Local.

According to Laplaine, the market for sex trafficking “runs in the billions of dollars”, with countries in central and eastern Europe playing an increasingly prominent role.

Malin Roux, who helped found Real Stars in 2010, explains part of the reason for the recent boom in trafficking in Europe:

“After the fall of the Berlin Wall the growth in trafficking of girls from eastern countries has been enormous,” she says.

“Europe has the highest level of sex slaves per capita in the world.”

According to statistics from the European Union, there was a nearly 10-percent increase in the number of registered trafficking victims sold for sexual exploitation between 2008 and 2010.

“If more European countries established laws against the sex trade, sex trafficking would plummet all over the continent,” Roux explains.

“Imagine all the positive effects such an event would cause, for society and individuals alike.”

And with the EU’s fifth annual Anti-Trafficking Day taking place on Thursday, Real Stars enlisted Laplaine to participate in an event at Stockholm’s Modern Art Museum (Moderna Muséet) to raise awareness in Sweden of the issue.

“We organized the Anti-Trafficking Day event because we think the issue does not receive enough attention,” Roux tells The Local.

Laplaine’s book will feature prominently at the event in the hope of reaching a larger audience.

According to Roux, “hope and positivity” are key words at the event.

“We want to see different parts of society come together, to share and exchange ideas,” she says.

Roux hopes visitors leave thinking: “OK, I can do something about this.”

By attending, Laplaine hopes to promote “See Me Not” while at the same time boosting support for Real Stars.

Laplaine has agreed to donate part of the proceeds from the book to the group and hopes the partnership continues.

“I would like the book sales to go into the millions,” Laplaine says with a smile.

“If I can manage to sell a lot of books that will really help Real Stars’ campaign.”