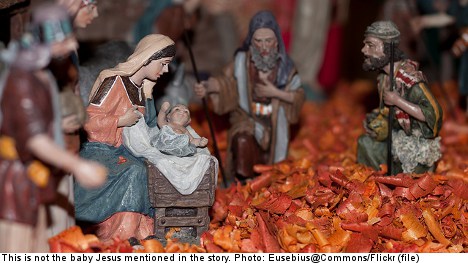 Organizers of the Christmas market at Fredriksdal Gardens and Museums in Skåne County always planned for their markets to have a nativity scene including Jesus, Mary and the three wise men.

However, the organizers soon changed their mind and emailed the two churches who were to provide the nativity scene, stating that the plan was cancelled as the market was to be a “politically and religiously independent operation”.

But this move prompted a storm of criticism from the Swedish public, forcing the head of the event, Joakim Thomasson, to back down.

“I was a little too hasty and hadn’t done my homework,” he told the TT news agency.

“He thought that it was a question of some kind of church ritual,” said Andrea Danielsson, head of the cultural board of the local authority (Kulturnämnden), to TT.

Church official Eva Åsare, who initially blasted the ban as a “blatant fear of religion”, also welcomed the quick reversal.

“It gladdens me. It was good that we made the effort on this. And full credit to people who can change,” she said.