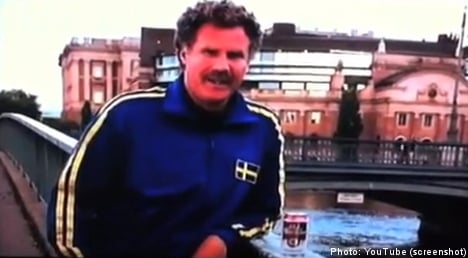 The five commercials promoting Old Milwaukee beer (embedded below) feature Ferrell in and around the Swedish capital, making fun of the language, enjoying the city’s archipelago, and cycling around Sergels Torg.

The ads, which appear to have been broadcast on Sweden’s TV3, came as a surprise to a representative from the company responsible for Swedish distribution of beers from US-based Pabst Brewing Company, producer of Old Milwaukee.

“I was not aware that there was a film of it on YouTube,” Dan Simson, Brand Manager for Pabst with Galatea Beer, Wine, and Spirits, told The Local.

He claimed the ads had not been broadcast in Sweden. Calls from The Local for comment from TV3 were not immediately returned.

In one of the ads, the 45-year-old American actor is seen in a boat with a blonde woman, speaking Swedish to the camera.

“This is my boat,” Ferrell tells the camera.

“This is my woman. This is my beer. It’s alright,” he says in Swedish, holding up a mug of foaming beer as the boat motors past Stockholm’s City Hall (Stadshuset).

But this isn’t the first time Sweden has had marketing connections with Old Milwaukee – a beer that’s not even available in Sweden.

The beverage was also the drink of choice of the Swedish Bikini Team, a group of American models who starred in commercials from the nineties, also famous for gracing the front cover of Playboy.

The ad echoes a series of similar Old Milwaukee commercials starring Ferrell which have been been released in the US in recent months.

The ads are shot in various cities around the United States, and all are performed in a similar deadpan style.

One was even broadcast during half time at the Super Bowl, although only in the state of Nebraska.

According to the Business Insider news website, Ferrell has made more than a dozen Old Milwaukee ads, apparently for free, after having approached the Wisconsin-based brewer about promoting the classic brand.

When asked about the US commercials by the A.V. Club entertainment newspaper, Ferrell replied, “I just love Old Milwaukee. That’s my official answer.”

“I just love a good, crappy beer,” he added.

The Stockholm-based Old Milwaukee commercials surfaced on YouTube just over two weeks ago, but it remains unclear whether they actually were broadcast in Sweden or who was responsible for producing and uploading the ads.

Ferrell is no stranger to Sweden, however, as he is married to 43-year-old Swedish actress Viveca Paulin and couple is known to spend summers at their summer cottage in eastern Sweden.

Pabst Brand Manager Simson from liquor distributor Galatea remained bamboozled by the ads, but suggested that Ferrell’s Swedish ties had something to do with them.

“I don’t really know why he would have done it. But he is married to a Swedish woman,” Simson told The Local.

“If he is visiting family here once every year, he might have thought why not make a buck.”

He added that Pabst currently has no plans to start distributing Old Milwaukee in Sweden.

Will Ferrell on a boat

Will Ferrell on a bike

Will Ferrell on Swedish words

Will Ferrell on his kidnapped wife

Will Ferrell in dubstep dance