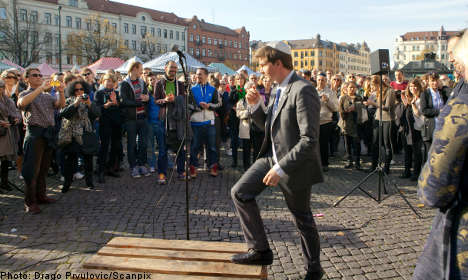 Glorious sunshine greeted the march. Many of the demonstrators were dressed in the Jewish head covering known as a Kippa.

Among those taking part were Malmö mayor Ilmar Reepalu, who has previously been criticised for comments on anti-Semitism in the city.

Integration minister Erik Ullenhag was the keynote speaker at the destination of the march on Möllevångstorget in central Malmö.

The minister condemned the recent attacks on the Jewish community and announced a 500,000 kronor ($76,000) grant by the government to the Swedish Committee Against Antisemitism (SKMA).

The money will be used for a new initiative in Malmö schools in a bid to address the problems faced by the city’s Muslim and Jewish populations.

“The role of schools in the work against xenophobia and intolerance can not be overemphasized,” Ullenhag said.

The march, which began at the synagogue on Föreningsgatan, featured representatives from all of Sweden’s five official national minorities – Jews, Roma, Sami, Swedish Finns and Tornedalers.

Hate crimes in Malmö have become a common feature of recent news reporting with a spate of attacks on synagogues and mosques over the past decade.