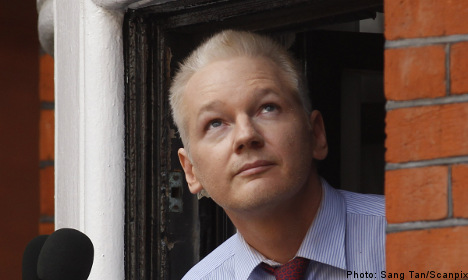 Ana Alban told BBC radio that the threat, made in August just before Ecuador granted asylum to Australian-born Assange, was “the biggest mistake” committed by Britain since she became ambassador.

“They were trying to show this little country that the British are still an empire and we should learn to be good boys during our stay here,” said Alban.

Former computer hacker Assange, 41, walked into the London embassy on June 19 claiming asylum in a bid to avoid extradition to Sweden, where he faces questioning over alleged rape and sexual assault.

British officials angered Ecuador in August by suggesting in a letter that they could ultimately withdraw diplomatic status from the embassy and enter it to arrest Assange, though they have not done so.

Ecuador granted Assange asylum on August 16 but Britain refuses to grant him safe passage out of the country, and he remains holed up in the embassy with the two countries in a diplomatic stalemate.

Assange denies the alleged sex crimes and claims he could eventually be passed from Sweden to the United States for prosecution over the WikiLeaks website’s publication of hundreds of thousands of classified US documents.

WikiLeaks enraged Washington in 2010 by publishing a flood of secret military files on the wars in Iraq and Afghanistan, as well as a huge cache of diplomatic cables from US embassies across the world.

Embassy officials told the BBC that the presence of British police — who have remained outside the embassy since June 19, poised to arrest Assange if he tries to escape — was “intimidating”.

Alban even found one policeman right outside her toilet window and had to use a different one, she laughingly told the BBC.

The ambassador said she was taken completely by surprise by Assange’s asylum request, and her immediate worries had been over practical issues such as where to find bed linen for the WikiLeaks founder.

The embassy still does not have a washing machine to handle their guest’s laundry, she added.