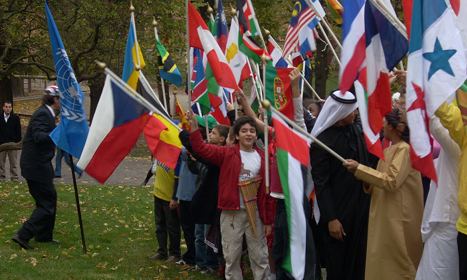 With almost 600 students from around 60 countries, it seems fitting that the school in the Swedish capital marks the official day that the United Nation came into existence in 1945.

Though the institutions may differ in size and stature, they share a common cause; to facilitate global cooperation, learning and understanding.

“It’s become something of a tradition for the school to mark the occasion,” says David Osler, principal of the Stockholm International Primary School. “It’s just a good chance for us to celebrate us being a school with students from all over the world – and a chance to recognise all of the nations our students come from.”

The day includes a parade around the park in the local neighbourhood where the entire school, everyone aged three to 18, turn outs in the style of a mini-Olympic opening ceremony. Students are encouraged to turn up in a form of national dress or traditional costume.

“It’s a very visual day and a chance for everyone to reflect,” Osler adds. With a teaching staff of around 90 spanning 20 nationalities, they too join in the parade after which comes the opportunity to capture the annual school photo.

The independent school is co-educational and accepts students from pre-school to grade 12. It follows the International Primary Curriculum and International Baccalaureate guidelines – with all education in English.

Around 15 percent of students hold a Swedish passport, with many of those holding dual nationality. Less than five percent have a solely Swedish background. Students attending the school have a strong international connection, for instance, because their parents have jobs that involve frequent international postings.

“The advantage of the school is that it offers a more diverse conversation in learning,” Osler adds. “There are lots of different perspectives – and it can be a challenge to harness those – but the result is much more cooperation and understanding. There are no stereotypes so interaction is much more natural and universal.”

For example, a class of 20 children can span over 15 nationalities, which helps create an exciting place of learning. The UN Day parade is just one way of expressing the diversity.

Both secondary and primary schools use the opportunity to learn more about international cooperation. “For the older student there’s an assembly with a speaker – a member of the diplomatic community – to talk about the UN and related topics of interest such as children’s rights,” Osler says. Last year, SiS was represented by students at a UN conference for schools in New York where they took part as delegates.

“In the primary school we talk about the UN in simple terms and sing songs from different countries,” Osler adds.

The United Nations Day always falls within the school’s Spirit Week, where students, teachers and parents come together through various fun events both in and outside the classroom.

The PTA organises a multi-cultural evening where parents and staff have the opportunity to share a taste of the world, welcoming guests to bring culinary dishes from their home country.

Indeed, both UN Day and Spirit Week highlight the Stockholm International School’s ethos of educating the next generation of global citizens.