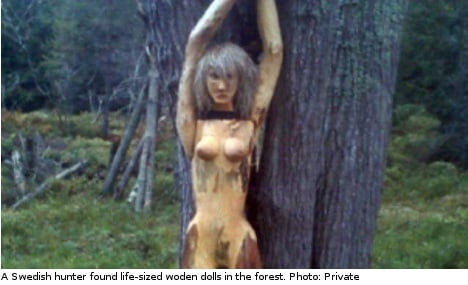 ”My first thought was ‘what the hell is this?’,” the hunter, who wished to remain anonymous, told The Local.

The man was hunting on the island of Enskär, in the Söderhamn archipelago, when he made the disturbing discovery.

As he was walking along he suddenly bumped into a fenced-off area in the wood, where he spotted what looked like a naked woman tied to a tree.

Upon closer inspection, however, it turned out to be a life-sized wooden sculpture of a woman.

“There was one tied to a tree that looked quite real. And another bent over a log,” said the hunter.

As he walked around the area he found several other, more primitive-looking sculptures depicting naked men.

“These were almost like totem-poles, with prominent eyes, coarsely carved limbs and rather large-sized penises,” the hunter explained.

He told The Local how he really didn’t like what he saw in the woods and that it seemed “awkward”.

“I wouldn’t go as far as saying I was scared or anything, but it just looked wrong in every possible way to see a woman tied to a tree.”

By the time the local paper Söderhamnskuriren caught wind of his discovery, the sculptures of the females had already been taken down.

Since the pictures were published in the local paper, there has been a lot of talk among the locals and across the country about who might be responsible for the freaky wooden figures.

When the paper contacted the person believed by many to be behind the scheme, the man reportedly denied it.

The discovery has since been given a lot of media attention, with international newspapers contacting both the hunter and the local paper to find out more about the find.

And among the locals there are mixed feelings:

“Lots of people got back to me about the sculptures. Some people seem to think it’s admirable craftsmanship; others that it is a sign of hatred against women,” the hunter told The Local.