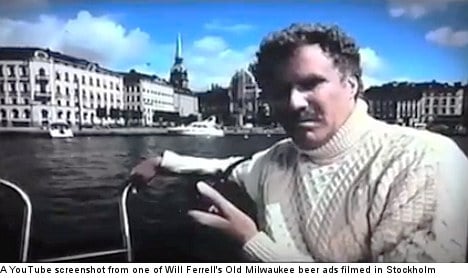 The five commercials, which promote Old Milwaukee beer featuring Ferrell in and around the Swedish capital, appeared mysteriously on YouTube three weeks ago and seem to have been broadcast on Sweden’s TV3.

And according to the man responsible for uploading the commercials on YouTube, the rationale behind the ads, which feature a brand of beer not even available in Sweden, is simple.

“Humour,” Philip Berger, a US-born filmmaker based in Stockholm, told The Local.

While Berger confirmed he had uploaded the commercials to YouTube, he was reluctant to release many details about the production of the Old Milwaukee ads.

“I was sort of involved in the production. I don’t want to say more than that,” he said.

He added that the circuitous route the ads took before grabbing the attention of media in the US and Sweden was somewhat intentional.

“The idea is that the ads would sort of enter the market organically, and go viral,” said Berger.

However, he remains baffled at how a world-famous actor like Ferrell was able to spend a whole day shooting commercials in the Swedish capital without raising so much as an eyebrow.

“I really don’t understand how no one seemed to notice,” he said in reference to the filming which took place last summer.

“Maybe it has something to do with the Swedish attitude toward celebrities in that they aren’t simply falling all over anyone who is famous.”

Berger was also struck by the fact that the Swedish press only seemed to notice the ads after they’d been written about by US media outlets.

“These ads were filmed in Sweden, and they were broadcast here, but it wasn’t until they became big in the US that people in Sweden seemed to take notice,” he said.

A spokesperson for TV3 confirmed for The Local that the ads were aired in September in three regional markets: Uppsala, located about about 70 kilometres north of Stockholm, as well as Norrköping and Linköping, which lie 150 and 200 kilometres, respectively, southwest of the capital.

Berger admitted that only a “very small percentage” of Swedes were likely aware of the Swedish Old Milwaukee ads.

Over the past year, Ferrell has filmed several Old Milwaukee ads which were then broadcast in local markets in the US before going viral on YouTube.

Despite being filmed in Sweden, the ads featuring Ferrell’s antics in Stockholm were meant for an audience half a world way, according to Berger, as part of an effort to revive a “legacy” US beer brand.

“I think they were really geared toward those in the US who were already aware of the previous Old Milwaukee ads,” he said.

Berger was unable to shed light on reports that Ferrell filmed all the Old Milwaukee commercials pro bono, but confirmed that he received payment himself for his services during filming.

What remains unclear is who was responsible for paying to have the ads broadcast on TV3 and aired in three mid-sized Swedish cities with a combined population of about 350,000 people.

“I’m pretty sure they had something to do with it,” said Berger.

Funny or Die did not immediately respond to inquiries from The Local seeking comment.

Despite the continued secrecy surrounding the campaign, Berger said the day he spent filming commercials with Ferrell in Stockholm was enjoyable, and praised the US actor for is Swedish language skills.

“I couldn’t stop laughing the whole day,” he said.

“Will Ferrell is a really down to earth guy. He could talk about water and have people laughing out loud.”

Will Ferrell on Swedish words