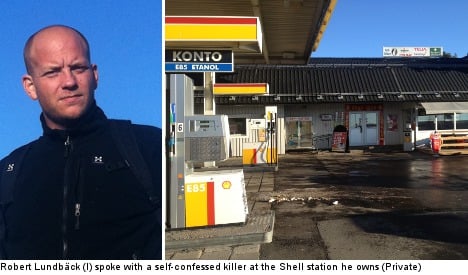 It was around 6pm during what had otherwise been an uneventful evening when an unknown man entered the Shell petrol station in Töre, a small village about 75 kilometres west of the Finnish border.

“He walked in and asked the girl at the counter if her boss was in and said he wanted to speak with him,” station owner Robert Lundbäck told The Local.

The helpful clerk then took the man to the back of the station where the 35-year-old Lundbäck was sorting inventory.

Much to the station manager’s surprise, the stranger explained that he had killed two people in Kemi in northern Finland earlier in the day.

“I wasn’t scared at all. He was so relaxed,” Lundbäck said of the exchange.

“I didn’t know if the guy really was a double-murderer from Finland or was simply suffering from delirium.”

Keeping his cool despite sitting face-to-face with a self-confessed killer, Lundbäck called the police before inviting the man to have coffee and chat while they waited for police to arrive.

“We talked for about 45 minutes or so. He didn’t talk about the killings much, but we talked about almost everything else,” said Lundbäck.

The station owner learned the suspected murderer was an architect who seemed well-educated, but also appeared quite tired during the pair’s conversation.

“I just couldn’t get my head around the idea that he was a killer.”

The man even offered to let Lundbäck take his picture, suggesting he might be able to make money by selling it to newspapers, but the station manager declined the offer.

When police finally arrived, the 63-year-old man calmly walked out with his hands on his head, according to Lundbäck.

“He said ‘thank you very much’, and got into the police car,” he said.

The suspect is now being held by police in Luleå, who have since been in touch with their colleagues in Finland about the case.

According to police in Finland, the 63-year-old man is the only suspect for the killings and was previously married to the female victim.

Finnish media reported that the victims were discovered around the same time that the 63-year-old man was chatting with Lundbäck and are believed to have died from gunshot wounds.

A court in Finland has also issued a warrant for the 63-year-old’s arrest, although it is expected to take several days before the man is extradited to Finland.

Lundbäck, who has owned the station since 2009, but worked there for nearly 20 years, said he’s never had a more bizarre encounter in all his time at the shop.

“One thing I can say though is that facing a double murderer felt less threatening than facing an angry customer who refuses to pay for his gasoline,” he told The Local.