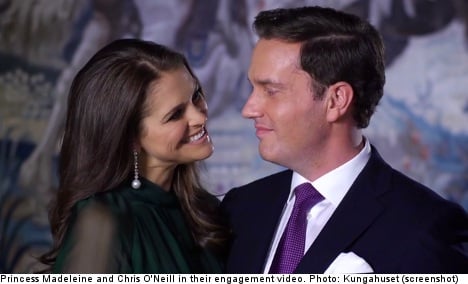 “He is my soul mate,” Princess Madeleine said in an interview published on the Royal Court website (embedded below).

“We are both extremely happy and delighted. It is a very special day for us.”

O’Neill also spoke about his decision to finally pop the question.

“I had been thinking about proposing for a while, but I wanted to wait until the right moment,” he said in the video.

“But I have been sure all along that Madeleine was the one I wanted to marry.”

The pair’s wedding is expected to take place in Sweden during the summer of 2013.

Roger Lundgren, royal expert and editor of Kungliga Magazine, told The Local that news of another Swedish royal wedding is likely seen as a welcome news for Sweden’s royals.

“It’s great news for the royal family, they will all appreciate this. Nothing boosts the monarchy better than a royal wedding,” he said.

“All media attention has been negative towards the family lately. There is a lot of gossiping, and horrible images have been published that have no truth behind them. It’s nice to have a wedding to look forward to.”

The princess has previously been engaged, to Swedish lawyer Jonas Bergström in 2009, a union which broke off the next year. However, with O’Neill being a US citizen, it is uncertain whether he will receive the same treatment as Bergström.

“When Madeleine became engaged to Jonas it was immediately known that he would receive her dukedoms, and would become the Duke of Hälsingland and Gästrikland,” Lundgren explained.

“The king can’t make an American citizen a Swedish duke. He has to become a citizen of Sweden first and these things take time, but it should happen before their wedding in summer.”

In terms of the wedding itself, Lundgren does not expect the same flair that heralded Victoria and Daniel’s ceremony in 2011.

“It won’t be as big and as fancy as Victoria’s, and it will probably be in the palace church. Instead of 1,400 guests we can probably expect 500,” he said.

“And there probably won’t be kings and queens of other European countries at the ceremony.”

While O’Neill may receive the dukedoms, he is never eligible to be the king, according to Lundgren, as the financier is not a direct blood relative of the king.

“Chris is just the same as Prince Daniel, he can never be the head of the state. But his children will be in line to the throne,” Lundgren told The Local.

The pair’s official announcement, via the Royal Court: