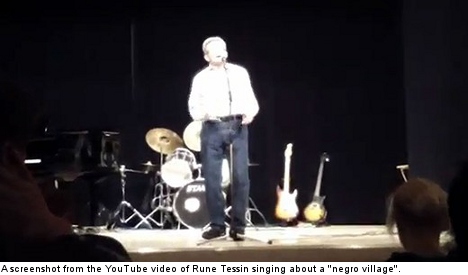 The incident took place on Sunday when Rune Tessin, a Green Party member of the local council in Åtvidaberg, took the stage at an event to raise money for “Min Stora Dag” (‘My Big Day’), a charity which helps sick children fulfill their dreams.

One of the songs chosen by the 71-year-old Tessin featured lyrics about a “negro village” (negerby) down in Africa.

Following the event a video of the Green Party politician’s crooning appeared on YouTube, much to the dismay of party colleagues.

But Tessin defended his decision to sing the “negro village” tune and had a hard time understanding why his performance had ruffled feathers.

“I like to sing and think it’s a good and catchy song,” he told the local Corren newspaper.

“I’m not a racist and I belong to a party that is friendly toward foreigners.”

He made it clear that he has nothing against the word negro and that he’s against any attempt to ban the word, explaining that he told the audience he would be singing about “stereotypes”.

Tessin admitted that the word “negro” might be considered offensive in the United States because there are “more stereotypes attached to the word and it’s more sensitive”.

He added that it’s also possible a cross section of the audience which witnessed Sunday’s performance might have also taken offence to his song.

“I’m sure there are some who were offended, like female teachers and mothers who have taught their children not to say negro ball (negerbollar),” he told Corren, referring to an outdated colloquial name for a a small, spherical, coconut-covered chocolate treat more commonly referred to in modern times as a ‘chocolate ball’.

Lottie Rääf, a representative for the group that organized the event, said she didn’t know that Tessin was going to perform the song, but stopped short of saying it was wrong for the 71-year-old Green to sing about a “negro village”.

“It might have been something else if he had been a member of another party or if it had been sung by a young guy,” she told Corren.