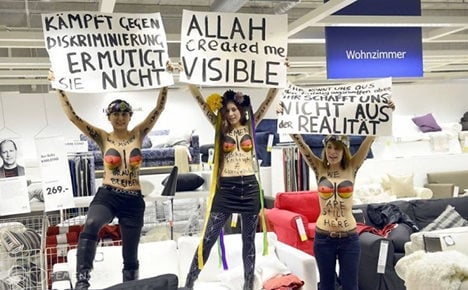 “Ikea has obeyed the wild Wahhabi regime of the Saudis and ‘adapted’ its catalogue by Shariah by deleting all of the images of women and girls,” feminist movement Femen, which claimed responsibility for the protest action, said on its website.

The three women, aged 32, 23 and 22, were fully clothed when they entered the Ikea store near Hamburg in northern Germany.

In the toilets, however, they removed their tops and painted German flags over their breasts and daubed feminist messages across their torsos, before taking to heading to the living room section bearing placards.

“Allah made me visible,” said another.

The German branch of feminist movement Femen carried out the action to protest Ikea’s decision to remove all women from the version of the catalogue destined for distribution in Saudi Arabia.

The removal of the women angered Swedish female government ministers, and prompted the company to issue an apology.

Staff and shoppers at the Hamburg Ikea branch watched in wonder for about ten minutes before security guards ushered the protesters out of the bedroom department, the German daily Bild reported.

“We painted our breasts in Germany’s colours because we are protesting for women,” graphic designer Irina, 32, told the paper.

“Our bodies are painted like posters, but they cannot be ripped up,” she added.

Femen began in Ukraine, where women have regularly staged nude protests against repression and violence.

“Islamist dollars are more important than human principles of liberty and equality for Ikea,” the group said.