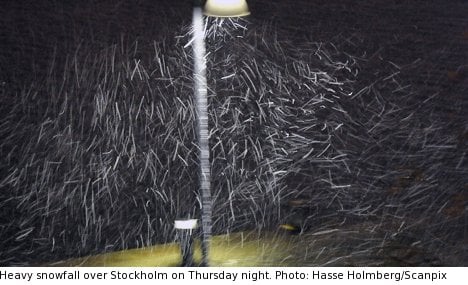 “The accidents started around 9pm and by now we’ve had some 24 in the county,” said Mats Brännlund of the Stockholm police to daily Dagens Nyheter (DN) late on Thursday evening.

Most of Thursday’s accidents were limited to damaged vehicles, although there were some passengers that required medical attention, largely complaining of neck pain. According to police, there were no life-threatening injuries reported.

By Friday morning the number of reported accidents had risen to 28, according to news agency TT, but no one else had been injured.

“Yes, we have had a few cars go off the road – of course it is the weather,” said Sven-Erik Ohlsson of the local police to daily Svenska Dagbladet (SvD).

Shortly before midnight two buses collided on the slippery E4 motorway, but no one was reportedly injured.

According to meteorologists, the situation had got worse as the snow started melting, making roads even more treacherous.

After a cold night, most of Stockholm saw sub-zero temperatures on Friday morning. Some snow had continued to fall over the area over night.

Many parts of the country saw snow over the course of Thursday evening, and even in Sweden’s most southern county, Skåne, snow and chilled rain fell overnight.

The Swedish Meteorological and Hydrological institute, SMHI, has warned of slippery roads in most of southern Sweden and the Stockholm area on Friday morning.

Forecasters also predict harsh winds and snow in the mountain areas and say that the cold spell will continue to grip the whole country into the weekend.