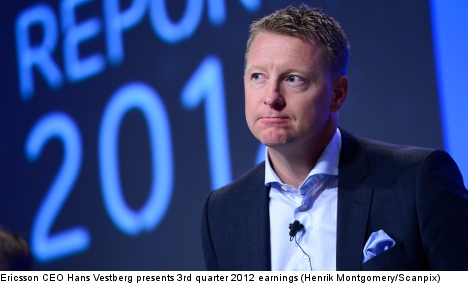 Net profit came in at 2.18 billion kronor ($325 million), much higher than the 1.42 billion forecast by analysts surveyed by Dow Jones Newswires.

Sales slipped by two percent to 55.5 billion kronor, in line with expectations.

Ericsson’s share price was down by 4.63 percent in midday trading in Stockholm, on a market down 0.76 percent.

Ericsson said it had experienced “weaker sales in parts of Europe, China, Korea and Russia” as well as a continued decline in sales of its CDMA equipment, used for mobile phone transmissions.

In North America, where the economy was seen as improving, network sales developed “favorably” as mobile phone operators invest in extending their network coverage.

But Ericsson is suffering from having signed contracts offering low margins just to maintain market share. Its gross margin plunged to 30.4 percent in the third quarter, from 35 percent a year earlier.

In addition, “we see a continued macroeconomic slow down and political unrest in parts of the world, which has led to more cautious operator spending in some parts of the world,” chief executive Hans Vestberg said in a statement.

Nonetheless, he was optimistic and said he believed “the fundamentals for longer-term positive development for the industry remain solid.”

“There are now one billion smartphones in the world and the number is expected to reach three billion in 2017,” he added.