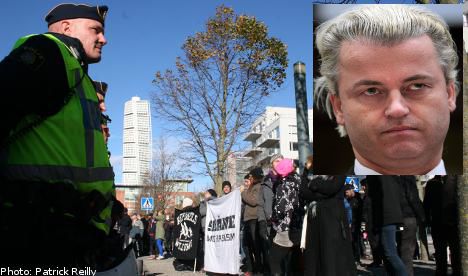 “Our intelligence told us that we should be prepared for trouble,” a Malmö police officer told The Local.

But at the end of the event a colleague assured The Local that the day “had passed without incident with just minor disturbances”.

The frequent critic of Islam was a guest of the anti-Islam Swedish “Freedom of the Press Society” (Tryckfrihetssällskapet) and addressed an audience of approximately 100 people at a venue in Malmö’s western harbour.

Outside a crowd of around 300 gathered to protest at the presence of the leader of the Dutch Party for Freedom.

The society’s president Ingrid Carlqvist explained the poor turnout in that the society had received many bogus applications for tickets.

In a heated confrontation, Carlqvist denounced the protesters as “screaming hordes of monkeys” whom she said had revealed her home address, claiming that she had been forced to stay in a Copenhagen hotel as a precaution.

Wilders’ arrival in Malmö was shrouded in secrecy with the location of his speech only revealed on Friday afternoon due to security concerns.

A heavy police presence surrounded the Kockums Fritid centre with officers confirming to The Local that the deployment was similar to that used for dealing with football hooliganism.

Protesters from Stockholm as well as Copenhagen chanting “no to racism and fascism” were joined by a large group of Scandinavian media.

While police confirmed that the demonstrators generally behaved in an orderly manner, several attendees, including some journalists, were pelted with eggs and oranges as they entered the venue.

Carlqvist welcomed Wilders on stage, describing as “one of the bravest freedom fighters in the world” and the 49-year duly spoke for almost an hour.

The Dutch politician told the assembled crowd that he “loved Sweden and its people” and added that “Malmö should not succumb to Islam”.

Wilders was applauded several times during his talk in particular where he defended freedom of speech and cited Winston Churchill as his inspiration.

He received largely sympathetic questions from the audience urging “Swedes to be good patriots” and that “patriotism is not fascism” before departing under armed guard.

The outspoken politician and author, who has received multiple death threats in the past, spent only a few hours in Malmö and left immediately after his speech to catch a flight home from Copenhagen.

The vast majority of protesters had meanwhile left by the time Wilders emerged from the venue with police telling the The Local that the cold weather had persuaded demonstrators to head home.