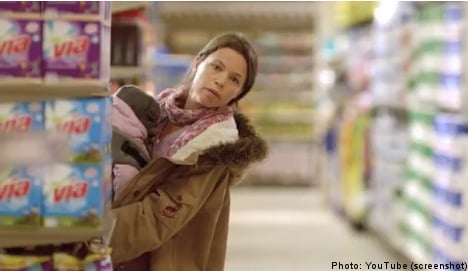 “We have certainly not meant to offend anyone,” said Coop press spokesman Magnus Nelin to The Local.

The commercial, featured below, was aired last week on Sweden’s TV4 and shows a woman shopping in a supermarket with a baby in a carrying device. While shopping, she repeatedly calls for “Liam”.

Finally, she finds him and it turns out that Liam is not a mischievous toddler escaping his mother but a middle-aged man who is checking out tools in the hardware department.

Many viewers reacted to the commercial, saying that it strengthens gender roles where women are in charge of household chores while men are irresponsible.

“You really have to look at this film as a small part of a larger picture. We wanted to show funny everyday situations that might occur in our shops,” said Nelin.

By Saturday some 8,000 people had liked a critical Facebook comment and almost 2,000 people had commented on the ads, according to daily Aftonbladet.

“What kind of idiots have thought up your last campaign,” one man wrote.

“Coop ridicules men and cements their irresponsibility. I don’t want to be portrayed that way,” another man wrote.

Others, however, took a different stance.

“Ignore the PC-brigade! I love your commercials,” one woman wrote on the page.

“I feel sorry for all the men who feel humiliated by the commercial. Can’t you just stop being silly,” another man wrote.

According to Nelin, most of the people that have been in touch with Coop about the commercial have been positive about the TV ads.

“But if we have made anyone feel as if we promote inequality or cemented existing gender roles, we want to apologize. All we meant to do was to depict our customers with a sense of humour and genuine warmth,” said Nelin.