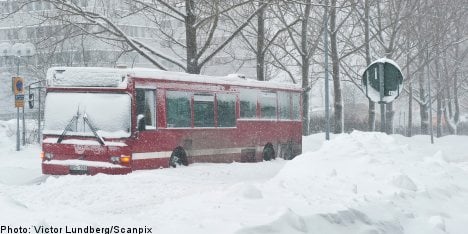 “There may be large quantities of snow,” explained Lisa Frost of the Swedish Meteorological and Hydrological Institute, SMHI, to the Aftonbladet newspaper.

“As it’s the first snow and it’s quite early in the season, we’re issuing the warning – especially as some people haven’t changed to their winter tyres yet.”

A class 1 warning is the least serious on SMHI’s three-level scale, and indicates “certain risks for society” which can cause “disruption to some important societal functions”.

The snowfall is expected to be heavy in certain parts of central Sweden and by Monday night will likely move on towards the north.

Throughout Monday, the Dalarna and Värmland counties have been slammed by a lengthy snow storm, which has left ten centimetres of snow. SMHI forecast a further 10 centimetres before Tuesday.

“The snow that has fallen has made the roads slippery,” Fredrik Glennemo of the agency told the Expressen newspaper.

“But we have people out there plowing. So far, we haven’t had any accidents.”