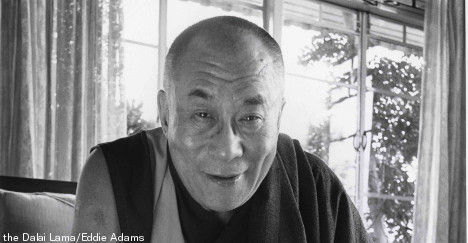 The “Speak Truth To Power” exhibition, which recently opened at the Fotografiska Museum in Stockholm, features portraits by the late Pulitzer Prize-winning American photographer Eddie Adams.

“When you see the photo exhibition you suddenly understand that human rights are not abstract,” Gabor Gombos of the UN Disability Rights Committee tells The Local.

“It is very concrete in terms of activities and in terms of human rights defenders,” he adds.

Gombos is one of several activists featured in the exhibit, which will remain at the museum until late November.

The exhibition, which also features portraits of more well-known activists such as the Dalai Lama and Desmond Tutu, advocates for “courage without borders” in an effort to raise awareness about the power of human rights.

CLICK HERE FOR A COLLECTION OF PHOTOS FROM THE EXHIBITION

“‘Speak Truth To Power’ combines the power of arts and education to bring much-needed attention to continuing human rights abuses and to demonstrate the capacity of an individual to create change,” the museum writes about the exhibition.

The exhibition is based on a book by Kerry Kennedy, daughter of late US attorney general Robert Kennedy, called “Speak Truth to Power” which contains a set of interviews with human rights activists from around the globe.

But it takes a lot more than just books and exhibitions to reach people, according to Gombos, who explains that the West suffers from what he defined as “human rights cynicism”.

“People no longer believe that human rights can change the world or the situation for those living in the unjust world,” he says.

“Many of them are like me, they are not all famous. Part of the project’s success is that you can grasp what is behind these people through the photographs.”

Gombos attributed this feat partly to Adams’ work with powerful, black and white images, as well as his experience as a war photographer.

“Catching the dynamic, the contrast, the tension… this is something he learned in the war, which is a physically very intense manifestation of dynamism, fear and courage. No one deserves to be in a war and I think that is what opened his eyes to such diverse areas of human rights,” Gombos explains.

He adds that he remains baffled by how well Adams understood his own particular cause and the human rights abuses people suffer because of their disabilities.

The exhibition aims to convince the visitors that “the courage to take action and to change is within each and every one of us,” according to the museum.

“It’s very encouraging to remember that these people are out there and there are many more of them. It is only an illusion that we are lonely.”