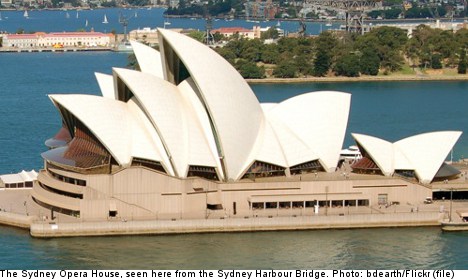 20-year-old Sebastian Tovi wasn’t satisfied with the regular tours at Sydney’s iconic tourist destination and decided he would make his own way to the top – at 2am and without permission.

“It’s not like him, he doesn’t usually do these kinds of things back home,” Tovi’s brother Wilhelm told The Local.

Early in the hours of Tuesday morning, the Swede and a friend got onto the Opera House via the roof of a nearby restaurant, the Guillaume at Bennelong, and then scaled the sails to the very top.

However, the stunt was seen by security guards, who were waiting for the pair at the bottom, later alerting police.

“We really wanted to climb the Opera House,” the 20-year-old told police at the time, according to The Australian newspaper.

Tovi’s brother puts the feat down to drunken shenanigans.

“I think he was partying with friends, maybe he was a little drunk, I don’t know. But the guards saw him and apprehended him when he got down. I don’t know why he did it, I guess it just happened,” Wilhelm said.

The daredevil Swede ended up in the Downing Centre Local Court on Friday, where he was handed a trespassing conviction and placed on a 12-month good behaviour bond, according to Australian media.

The 20-year-old has been in Australia for over two months on a working holiday, and plans to head to New Zealand on Monday.

The Sydney Opera House is a performing arts venue, designed and built by Danish architect Jørn Utzon and opened in 1973.