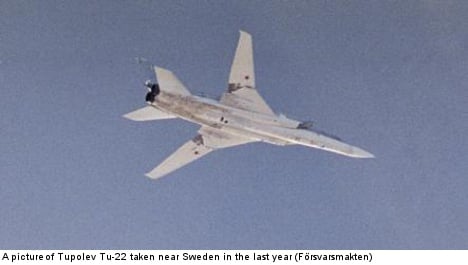 “We haven’t really made public these kinds of images since the Cold War era. But then we recently realized that people wanted to see these images. So we had a think and then decided to do it,” Colonel Anders Persson of the Swedish Air Force told The Local.

The images, all taken of foreign planes in international air space in the Baltic Sea region, were all snapped within the last year. They represent a small selection of planes that have been spotted near Swedish airspace and although the released no particulars about the nationality of the aircrafts, but flags on some of them indicate that they hail from countries as varied as the US, Russia and Germany.

“We take these kinds of pictures and document the movement of foreign planes in our near vicinity every week,” Persson said.

He emphasized that the planes in the recently released picture had not violated Swedish airspace, adding that actual intrusions by foreign military aircraft rarely take place over Sweden.

RELATED PHOTO GALLERY: Secret images from the skies above the Swedish border

“It happens very seldom and not once so far this year,” he said.

According to daily Aftonbladet, both Soviet and Nato planes often entered into Swedish airspace without authorization during the Cold War.

And even today Sweden always keeps a number of planes ready to scramble into their should the need arise to deal with an intruding aircraft.

“Generally these things happen very fast and we have to act before they have even reached Swedish airspace, otherwise we would never be able to catch up with them,” said Persson.

As the definition of airspace intrusion is broad and rules requiring foreign powers give more notice if one of their aircraft is to pass over Sweden, the number of foreign planes that cross Swedish airspace without a valid permit has risen recently.

“But then we generally know they are coming and it is just a question of us preferring to have had longer notice. Then we just file a report,” said Persson.

“And then it’s not really that serious.”

If foreign planes cross the border without permission, they are asked to leave and failing to comply could ultimately mean being shot down.

“If they don’t leave immediately when asked there are very clear instructions what we should do, but there are always warning shots fired first,” Persson told The Lcoal.