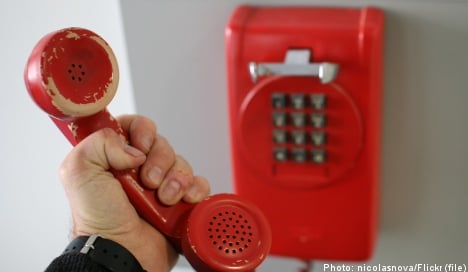 Since the Preven Tell helpline opened in March, more than 300 people have called to ask for help. Most are men between 35 and 45, but a number of women have also called, as have relatives with concerns about family members’ behaviour.

“These are people who have comprehensive and uncontrollable sex addiction,” Katarina Öberg, a psychologist at Karolinska University Hospital, told the Dagens Nyheter (DN) newspaper.

“Among them we find men and women who fantasize about committing assaults against adults or minors.”

Öberg estimated that around 75 percent of callers to the hotline are concerned about their ability to control their sexual appetite, and according to a recent review of the hotline’s operations, about half of callers have since sought treatment.

“If we can prevent just one attack, that saves at least one person from a lot of suffering and in so doing results in a major gain from a society perspective,” Stefan Arver, head of the Centre for Andrology and Sexual Medicine (Centrum för Andrologi och Sexualmedicin, CASM) at Karolinska, told the TT news agency.

While Arver praised the results of the hotline thus far, he explained that Sweden still lacks sufficient infrastructure for providing help to people who fear their sexual desires might get the best of them.

“A structure must be created that provides geographic proximity to appropriate care,” he told TT.

Another shortcoming with the hotline is that people who may commit sexual attacks may not actually use it.

Therapist Börje Svensson, who has worked with a number of convicted sex offenders, said many of them understood what they did was illegal, but failed to see how they may have harmed the children they attacked.

“Those sorts of people would never call a helpline,” he told TT.