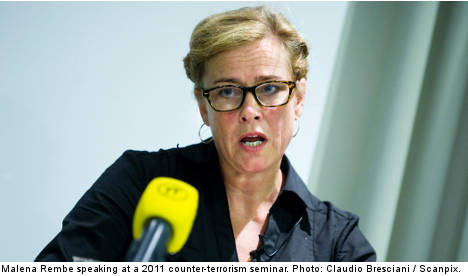 “There was a lack of dialogue about the mission and the operations,” the resigned director, Malena Rembe, told the Dagens Nyheter newspaper (DN).

The Counter-Terrorism Co-operative Council is tasked with analysing terror threats and informing and updating different authorities. It is a cooperative body coordinating the work of the National Defence Radio Establishment, the Swedish Security Service (Säpo) and the Military Intelligence and Security Service MUST (Militära underrättelse-och säkerhetstjänsten).

Rembe has been in the job for less than a year. She was previously head analyst at Säpo’s counter-terrorism unit.

On October 19th Rembe and her deputy chose to resign in quiet, without making a public announcement.

Rembe did not want to go into detail about her reasons for resigning, but she did cite differences in opinion between intelligence chiefs and the government when it comes to whether or not the public should be informed about terror threats.

Willhelm Agrell, a professor in intelligence analysis at Lund University, told Dagens Nyheter that the Counter-Terrorism Co-operative Council plays an important role in overcoming the gaps that exist between the Swedish authorities that deal with intelligence.

“Previously, there was no coordinating body at a central level, but the threats have become more complex and overarching. Therefore it is important that this kind of council functions well.”

According to Magnus Ranstorp, head of research at the Center for Asymmetric Threat Studies (Centrum för asymmetriska hot- och terrorismstudier), it is remarkable that the intelligence chiefs have resigned after such a short period of time.

“The council has an important role in making long-term assessments,” said Ranstorp.