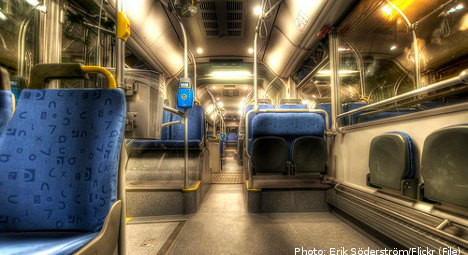 “The driver called the police, it wasn’t enough to tell them off,” said Stefan Gustavsson of the police to local paper Göteborgs Posten (GP).

The police received a call just after 6am on Sunday after the man and the woman had been found involved in sexual intercourse on a local bus, which was carrying passengers toward Brottkärr in Gothenburg.

“The driver was bothered by what was going on and I guess the other passengers were also bothered,” said Gustavsson to the paper.

The lovebirds, who seemingly couldn’t keep their hands off each other, were interrupted when the police entered the vehicle. Unperturbed by events they chose to continue their journey in a taxi.

Police didn’t know what had happened to them after that:

“You’d have to ask them – they seemed rather frisky on the way back,” Gustavsson told GP.

According to the paper the other passengers had not been “impressed by the performance.”

Despite being caught in the act in public, the couple are not under suspicion for any criminal offence.