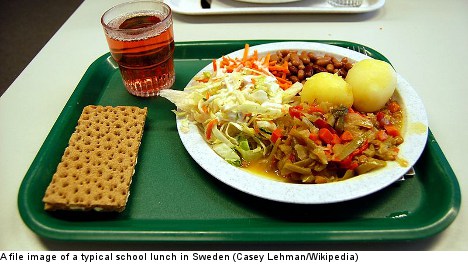 “Now we’re starting to organize it. It will be underway as quickly as possible,” Lisbeth Lennartsson, a member of the local council in Borgholm, told Sveriges Television (SVT) on Monday.

Lennartsson said she was surprised at the strong reactions and intense media attention that emerged following a decision to not serve state-subsidized school lunches to around 100 children currently attending a temporary school set up for the children of asylum seekers housed on a north Öland camping site.

“They are already getting subsidized food by the state and then I feel that perhaps this should be looked over so that they don’t get double lunch subsidies,” head of education in Borgholm, Lars Bylund, told daily Dagens Nyheter (DN) last week in explaining the decision.

The discovery prompted the Swedish Schools Inspectorate (Skolinspektionen) to launch an investigation into whether local authorities were violating Swedish law by not serving the children free school lunches.

Around 20 school chefs also signed an open protest letter to Borgholm officials to express their outrage that the refugee children weren’t being served food.

While the Schools Inspectorate investigation into whether the town violated the law is ongoing, the municipality has nevertheless decided to act before the agency’s completes its probe.