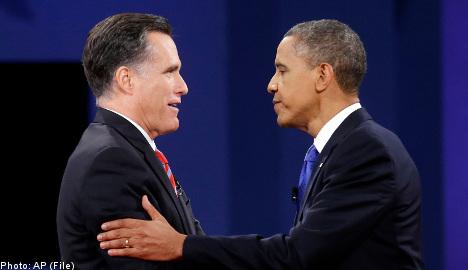 For those who like watching from home, there are two Swedish channels that are dedicating Tuesday night to the US election frenzy.

SVT will start broadcasting at 10.30pm live from Washington with news anchor Claes Elfsberg. In the early hours of the morning, there will be documentaries about the election to keep you alert until the very end. This broadcast will end with the inaugural speech.

TV4 will be broadcasting from Stockholm at 11pm, with Anna Lindmarker and political scientist Marcus Oscarsson. They will have other guests through the night, which will be alternated with live reports from Los Angeles.

For those who prefer the American version, CNN has mobilized 24 correspondents to report from all over the US on election night. You can follow events at cnn.com/live.

However, if you are looking to get out of the house, several events have been organized in cities all across Sweden.

The Organization Democrats Abroad has scheduled events in Stockholm, Gothenburg, Lund and Kalmar. Though they may be rooting for the re-election of current president Obama, non-Democrats are still welcome to these events.

Gothenburg: Gathering at Democrats Abroad chair Carry Cooper’s apartment, all through the night.

Kalmar: Gathering at Democrats Abroad chair of the Kalmar Chapter.

In university town Uppsala, north of the capital, the student radio is broadcasting live throughout the night. Additionally, from 9pm anyone is welcome at Luthagsesplanaden (Ekonomikum) where there will be big screens for live broadcasting. However, space is limited, so it might be advisable to arrive early.