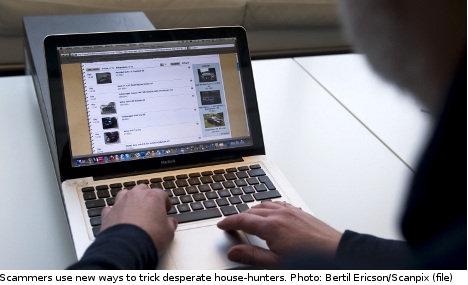 “I’ve got no connection with Sweden at all, I don’t know how my name got involved in this,” Dr David Ramsdale, a cardiologist from Liverpool in Britain, told The Local.

Ramsdale’s name and photo were taken from the website of his hospital two weeks ago by a scammer preying on eager house-hunters in the west of Sweden.

His identity was then posted on a Swedish buy-sell site, together with a link to images of an apartment’s interior. Subsequent emails to interested Swedes explained that Ramsdale owned the flat but was unable to come to Sweden for a meeting.

“I had seven or eight emails from Swedes who were bright enough to do a background check. They all said that there had been other scams and they were just making sure,” he explained.

“I felt really bad for them. I emailed back, but there was nothing I could do for anyone else who saw the ad.”

While Ramsdale was concerned about the plight of house-hunters in Sweden, he was also worried about the theft of his own identity, and contacted UK police.

“The police said that no crime had been committed and that they couldn’t do anything unless I could prove that someone had made money from my name. I can’t prove it, I have no idea,” he said.

“I’m worried people might think it’s actually me and I feel helpless. The most useful thing I could do was respond to the emails.”

With thousands of students, expats and jobseekers looking for housing nationwide, coupled with a chronic shortage of rental apartments in Sweden’s main cities, more and more people are falling victim to similar scams.

Fifteen people were stung in a mass housing fraud in Stockholm on Monday, according to the Aftonbladet newspaper, where each of the house-hunters lost an “advance rent payment” of 5,500 kronor after responding to an ad on Blocket.se, a Swedish buy-sell website.

The “home-owner” had told them she needed the money to ensure that her trip across the country from Gothenburg wasn’t going to be a waste of her time.

But it wasn’t until all 15 people showed up to pick up a set of non-existent keys they realized they had been duped.

Meanwhile, Ramsdale’s stolen identity case is not the first time scammers have used a foreign professional’s title to lend credence to their offer.

A person claiming to be a neuro-oncology doctor from London, David S Wilson, has become notorious on house-hunting websites for a scam of his own making.

When The Local requested more information about Wilson’s flat, a reply in bad English (see verbatim email below) described in detail how it was furnished, the parking facilities and even the pictures on the wall:

“i bought this apartment for my son during he’s studies, but now he’s back home in London UK permanently, so i’m renting the place for unlimited time,” the email stated. It ended by requesting our name and contact details followed by a request for a “security deposit” of 5,000 kronor.

According to information on anti-fraud website Scamwarner.com, the same email has been used to try to defraud people as far away as Finland and Belgium.

So how can someone be sure they’re not getting fooled?

Jarl Jönsson, an advisor at the Swedish Tenants’ Association (Hyresgästföreningen), explained that the key is to be extremely thorough, no matter how desperate you are.

“Always go to the house and be sure there is an apartment there to begin with. While you’re there, check whether the building owner’s name is posted on a notice in the lobby. It’s a good idea to call them and be sure the would-be landlord has permission to rent it,” he told The Local in August.

“And before you hand over any money, also be sure to actually talk to the landlord.”

While Ramsdale no longer receives emails about the apartment, he has since discovered that a colleague had been hit by a similar Swedish scam, and reported the matter to Swedish police but to no avail.

Claiming that authorities are “uninterested unless someone is killed”, Ramsdale expects that the trend can only continue in the same direction.

“Someone is suffering somewhere and it’s terrible. But even if they sort it out in Sweden, the con artists will probably just move on,” he told The Local.

“All I can say is that I would never give away my money like that. People shouldn’t give anyone money until they’ve at least seen a property.”