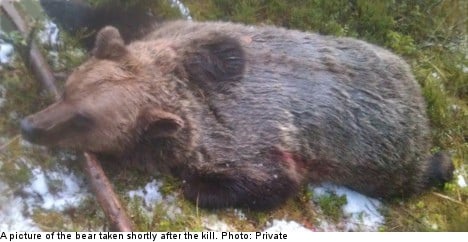 Leif Backlars, a 45-year-old hunter from Enviken, central Sweden, was in for a surprise when hunting for elk in Dalarna on the weekend.

“The dog started barking and I thought he’d seen an elk,” Backlars told The Local.

However, there were no elks in sight.

Rather, the hunter’s dog was reacting to movement in what appeared to be two small holes just a few metres from Backlars.

“Suddenly a bear jumped out of the ground and came at me, so I shot at it without thinking. I wasn’t scared, there was no time. Everything happened so fast,” he said.

The hunter shot three rounds into the 120 kilogramme female bear, knocking it backwards and fatally wounding it.

Backlars later realized that the bear was going into hibernation and had covered itself, leaving only two small holes in the ground.

With the bear hunting season over, local police are now looking into whether hunting crime charges should be filed, but Backlars is not worried.

“We’ll see what happens, but I don’t think anything will come of it,” he said.

The state has now taken care of the body of the dead bear.