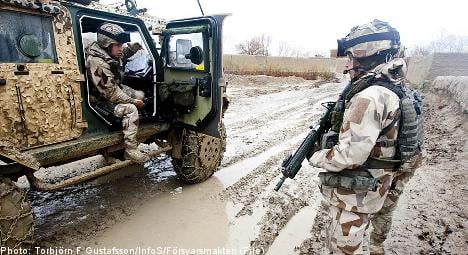 “I want to stress that this is just military personnel. We will intensify civilan and aid efforts. Afghanistan will be one of Sweden’s largest aid receivers for a long while yet,” said Foreign Minister Carl Bildt to news agency TT.

The government on Thursday presented their proposed plan for Sweden’s efforts in Afghanistan together with the Social Democrats and the Green Party.

According to the government, Sweden has earmarked some 8 billion kronor ($1.2 billion) to aiding Afghanistan over the next ten years.

According to Bildt, the decision to reduce the Swedish military presence in Afghanistan is consistent with the security situation in the area controlled by the Swedes.

“The security situation in our area has developed relatively well. There have been incidents but much fewer than anticipated,” said Bildt.

At the start of 2013, the Swedish military staff in Afghanistan will consist of some 400 uniformed staff. By summer 2013, it will be reduced to 300.

However, some 35 people in the helicopter unit will be added to the existing staff, as well as personnel working on the ongoing phase-out.