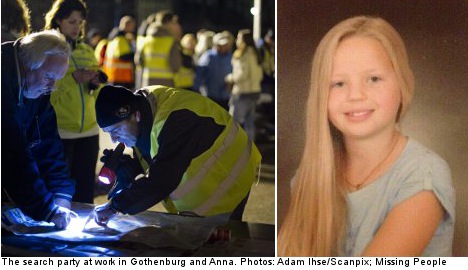 “I can’t give you any details of what the man has said or what our suspicions are,” said Björn Engblom of the county police to local paper Göteborgs-Posten (GP).

The man was discovered together with the 9-year-old girl outside some 400 metres from her home just before 3am on Friday.

He was immediately brought in for questioning and around 9.30am a prosecutor decided to formally detain him.

Some 500-600 volunteers from the organization Missing People took part in the search for the missing 9-year-old.

There are differing stories as to how the girl was found. According to the volunteers, she was spotted by three young women.

“There were three girls who came before me and found her and I followed shortly after,” said volunteer John Petterson to TT.

The group quickly surrounded the 24-year-old man, blocking his ability to leave the scene.

”I asked where he had found her and he pointed a bit further away and said ’in the park’,” said Petterson.

Petterson then asked the man if he had been part of the search party. The man said that he was.

”But he seemed really sad and subdued. It seemed suspicious,” said Petersson to TT.

The volunteers then made the man sit down to wait for emergency services to arrive.

On Friday morning, police classified the incident as kidnapping and the investigation will be handled by the county police.

The 24-year-old will also be assigned a defence lawyer.

According to GP, officers used the morning hours to gather as much information as they could about the disappearance of the girl, from the girl herself as well as others who may be able to shed light on events.