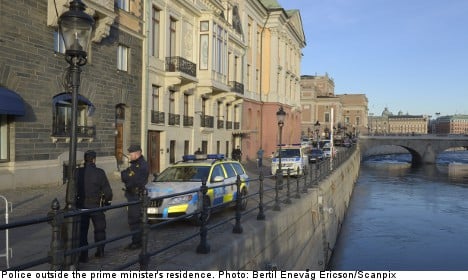 Stockholm police spokeswoman Towe Hägg told the TT news agency that Swedish security service Säpo, which manages the prime minister’s security detail, had not been brought into the investigation.

“We are aware that something has happened at Sagerska Palace today, but we haven’t been formally called in,” Säpo spokeswoman Sirpa Franzén told TT.

The prime minister was not in the house at the time of the incident.

“Fredrik Reinfeldt is fine and on an external visit. He is not at Sagerska,” Roberta Alenius, Reinfeldt’s press secretary told Expressen.

Svensk Bevakningstjänst confirmed for TT that it was one of its employees that had died.

“He has worked here since 2006,” said Anders Lönnebo, CEO of Svensk Bevakningstjänst.

The guard had the right to bear arms and Lönnebo denied that there were any signs the man had been feeling unwell, stating that it was “rather the opposite”.

The company has since informed the man’s relatives.

“We offer our condolences, this is a tragic incident,” Lönnebo said.

Sven-Erik Olsson of the Stockholm police confirmed that the guard was found by a colleague.

“He was found by a colleague in a smaller room with injuries that came from his own weapon,” he told TT.