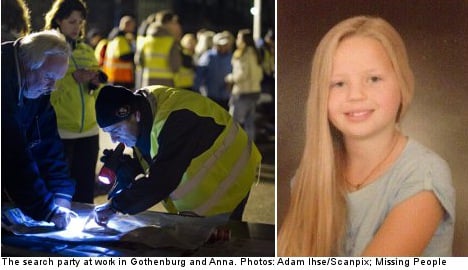 The girl, named as Anna, was reported missing on Thursday afternoon and was found on Friday morning after a massive search.

“The suspected man has admitted that he abducted Anna and has had control over her,” according to a statement on the Gothenburg police website on Friday.

The statement explained that the investigation into the suspected kidnapping would continue over the weekend with further interviews planned.

“The prosecutor will make a make a decision regarding remand during Sunday.”

Anna disappeared while walking the short distance to school from her home in the Gothenburg suburb of Örgryte on Thursday morning.

She was however not reported missing by the school until Thursday afternoon, prompting a massive police and public search operation.

Up to 800 members of the public took part in the search which was coordinated by the Missing People charity.

The 24-year-old suspect is reported to have taken part in the search and ultimately handed over the girl, claiming to have found her in a nearby park.

“I asked him where he had found her. He pointed over there and said ‘in the park’,” said search party leader John Petersson to the TT news agency.

“But he seemed really sad and subdued. It seemed suspicious,” Petersson added.

The man was made to sit down and wait by search party volunteers until the police arrived.

Police have searched a cellar in a nearby house in which the girl is thought to have been held, according to the local Göteborgs-Posten daily.

The girl’s school has come under fire for not reporting Anna missing until Thursday afternoon and an internal investigation will be launched on Monday.

“It could have been the human factor, or a problem with routines,” said Susanna Hanson, head of education at the local council, to TT.

There are no reports of Anna having been injured during her 19 hour ordeal and her father told the Aftonbladet daily that she is “feeling okay under the circumstances”.

The parents told the newspaper how they had given up hope of finding their daughter before they received a call shortly before 3am on Friday.

“It was such an incredible feeling before I understood that that she had been found and was safe,” her father said.