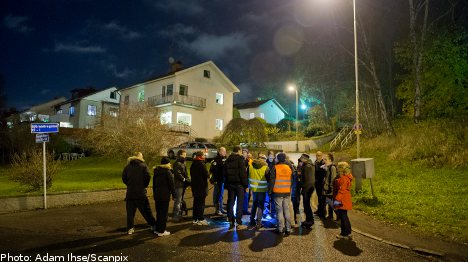 The man has confessed to having abducted the girl but denies kidnapping her and maintains that the offence amounts to unlawful deprivation of liberty.

“There will be a discussion regarding the offence, but my assessment is still that it is a kidnap,” said prosecutor Per-Erik Rinsell to the TT news agency.

The remand hearing will take place at Gothenburg District Court on Monday.

The 24-year-old man was interviewed by police on Sunday.

“In principle it was a repeat of Friday’s interrogation,” the man’s lawyer Claes Östlund said to TT.

Östlund explained that he expected his client to be remanded into custody and that he will maintain his stance that the crime should be unlawful deprivation of liberty.

“He realizes that he has done wrong. He knows the rules of the game and is currently waiting for Monday’s remand hearing.”

Nine-year-old Anna disappeared while walking the short distance to school from her home in the Gothenburg suburb of Örgryte on Thursday morning.

She was however not reported missing by the school until Thursday afternoon, prompting a massive police and public search operation.

Up to 800 members of the public took part in the search which was coordinated by the Missing People charity and ended successfully in the early hours of Friday morning.

The 24-year-old suspect is reported to have taken part in the search and ultimately handed over the girl, claiming to have found her in a nearby park.