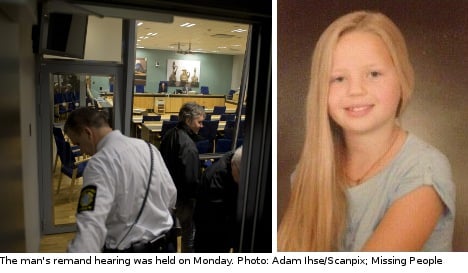 The young girl, Anna, disappeared while on the way to school on Thursday and was missing for 19 hours. Police and several hundred volunteers from the organization Missing People searched for her throughout the night.

The girl and the 24-year-old suddenly appeared in the area where she had gone missing at 3am on Friday, while the search party was scouring the neighbourhood for clues as to her whereabouts.

Just after 11am on Monday the suspect entered the court room at the Gothenburg District Court. According to news agency TT, he was dressed in grey clothes and looked collected as he listened to the prosecutor’s remand speech.

“I demand the suspect be remanded into custody on suspicion of kidnapping,” said prosecutor Per-Erik Rinsell during the remand hearing.

”Because his mental state hasn’t been analysed yet,” said defence lawyer Claes Östlund to TT.

The prosecutor also said that he feared that the man would remove evidence or obstruct the investigation were to be released. However, the suspect contested this.

The prosecution then asked that the rest of the hearing be held behind closed doors, and the gathered press were made to leave the room.

Meanwhile, at Anna’s school, the school psychiatrist, counsellor and nurses have been prepped to give extra support to any students in need.

“The situation in the school is as normal as it can be considering what has happened,” said the local council’s head of education in the area, Susanna Hansson, to TT.

On Monday, the council launched an investigation into if – or how – the school fell short in its procedures by not immediately reporting to her parents that the 9-year-old girl didn’t show up as expected on Thursday.

This is expected to be concluded and presented to parents on Wednesday when an information meeting has been scheduled in a local church.